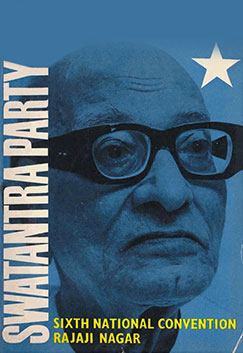 Swatantra Party was founded in the year 1959 by leaders opposing the socialistic policies of the Congress government. Some of the prominent leaders of the time including C Rajagopalachari, Minoo Masani and N G Ranga collaborated to form a liberal and conservative party. The party stood for market-based economy and the dismantling of the license raj.

In its first party convention held in Bombay on 1st August 1959, several regional parties and erstwhile Kings and Princes including the Maharajas of Jaipur and Patiala joined the alliance to form a strong liberal front opposing the socialist and communist political ideology then dominating Indian political discourse.

Other distinguished members of Swatantra included Dayabhai Patel the son of Sardar Vallabhai Patel, businessmen like Homi Mody, A D Shroff and experienced members of the civil service like H M Patel, Narayan Dandekar and J M Lobo Prabhu. N G Ranga went on to become the first party president while, Minoo Masani was elected as the secretary of the party.

The Swatantra Party contested its first general election in the year 1962 and won 25 seats in the third Lok Sabha of 1962- 1967. It also won a total of 207 seats in various other state assembly elections and went on to form a main opposition to Congress in four states including Bihar, Rajasthan, Gujarat and Orissa. The next general election of 1967 made Swatantra party the single largest opposition party in the Lok Sabha with a total of 44 seats. Unfortunately, the rise of the party came to a halt after it managed to obtain just 8 seats in the next general elections of the year 1971.

After the death of Rajaji in the year 1972 the party lost its momentum and finally merged into the Bharatiya Kranti Dal in 1974.